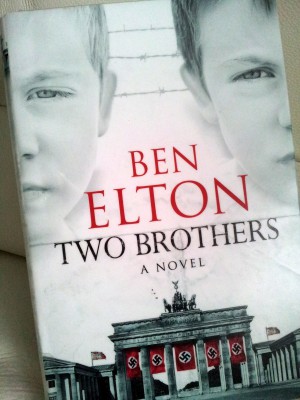 As it’s summer and theoretically we have more time to read (haha!) I thought I’d write to you about some of my top summer reads. Not all of them will be easy reading and I’m starting off with an epic historical fiction. It’s an incredibly well written and beautiful story about two brothers who were born in Germany during the Nazi’s rise in power.

In this part autobiographical account Ben Elton draws on some of his family history to bring this fictional tale to life. The story begins with a tragedy; a Jewish woman gives birth to twins in Germany in 1923, and one of the boys dies. As she says goodbye to one son, another, a gentile born on the same day in the same hospital, loses his mother and so the hospital staff give her the boy to raise as her own. It is a secret shared by only her and her husband, until one day, when being a gentile in a country being torn apart by anti-semitism is something you want to know about.

It covers some horrors and shows the increased everyday strain faced by the Jewish people under the hands of the Nazi’s and also by many ‘normal’ German citizens who frighteningly swallowed the propaganda fed to them by the political party in charge. There is a memorable scene were a prestigious Jewish family were made to get on their knees in front of their home and lick the ground like dogs. There are also some stories of faithfulness and how love can be a stronger bond even than blood.

Challenging and poignant, this book is a page turner. I read it in two days and could hardly be seen without it at the end of my nose.